skip to main | skip to sidebar

Dog Leads - Which team does your dog support? 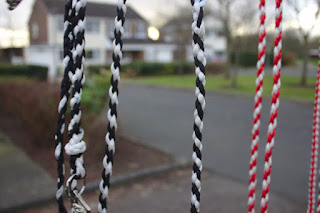 These dog leads are made from 550 paracord.  Each is braided with 4 strands of paracord.

The 1 metre extender has a split ring at each end and removable dog clasp attached to the other. this could be used to extend a lead or help attach a lead to static object £5

the 2 meter lead has a split ring in the handle and a moveable knot with a split ring.  The dog clasp can be removed £10

The 3 parts can be chained together 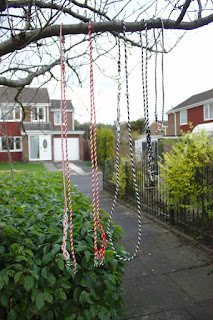 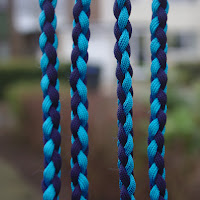 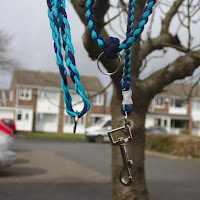 I am such a failier I even fail at failing.

So at the start of a very long weekend phyically ending by comming home to take the dog for a walk at 5:30 Sunday and beginning 8:10am Saturday when I set off for Bishop to do my 100 lengths.

There were 4 of us ready to swim two other middle aged women and a man. The women were doing 60 lenths and the man was doing 5k in two hours. I choose the lane with the man. So I set off to swim and after an hour I wanted a wee and convinced myself that I was going to be in the pool untill 10:05. So at about 9:50 I looked up to find out I only had to do 2 more lengths. My time was 1 hour 18 minutes and 20 seconds, the counter though it was impressive. So one would expect that I would then go home and rest.

I got changed and walked the 1.7 miles to the Rugby club, disapointingly I wasn't sore. I walked past a wool shop and bought some dk for socks. I should have bought some food on the way but didn't seem to pass any food shops, I am sure the stomack pains were hunger. I got to the club had a burger, some water and a mars.

Then took some pictures of the U13s playing a touring side, it was a good side which was good for our much improved side to be playing a better team. My partner refereed, when looking at the pictures I realised he had he was wearing a Gaycliffe shirt. I uploaded the pictures and showed to the opposition. Ok now go home and rest.

I managed to get a lift to "watch" the 2nds play Durham III I particualy wanted to visit Durham as I have connections there. This included a 2/3 mile walk to the pitch at Shincliffe. I took pictures of Durham III beating Bishop IIs for both sides. The day had a hot sun with a cold wind. It turns out the hot sun turned be bright red.

Soon after getting back was Charlotts 18th party a prominant character in the club. Stuart picked me up about 10:30, it was only then I told him how I did on the swim as I was annoyed he didn't pick me up or arange for me to be picked up. I had two matched to watch the next day. It turned out only the U17s county Final. Stuart left me at about 4pm to get the bus home. There is a walk up a steep hill from the club to the bus station. Home walk the dogand process the 600+ pictures I took.

This morning (Tuesday) I went swimming again, only to be asked by my son "You said you would never do it again". Well I am fitter, thinner and can eat more chocolate and have got to do better next year.

Posted by Sallyje at 3:18 AM No comments:

Last weekend I had a nearly rugby free weekend going to barcamp and learning two new games. Powerpoint Carokee. Download a random power point you have never seen before and talk yourself though it. A Warewolf a mind game thingy. One of the lectures was titiled something like Jsritpt and how to impress girls, so of course all the girls attended. I think we all agreed that boys would be more impressed by girls knowing jscript that the other way round. Anyway I have been introduced to Jscript and CSS3. I think I am going to be be a stubbon bitch and use css3 knowing that the majority of poeple who use internet explorer will never see the improvements I have made.

The barcamp was held in the Life Centre which had no windows at eye height which meant that I didn't see the horizon for 26 hours a really strange experience. Got home via the rugby club to find the front door unlocked and my eldest upstairs on Samuel Xbox. Nice to know I am apprciated for something. I haven't seen or heard from him since.
Posted by Sallyje at 10:22 AM No comments:

So 9 swims left. I have rearranged to do the swim on Saturaday the 17th of April between 8:30 and 10:30. The Under 13s, my sons team, has a touring side to play against on that moring which I Should imagine I will be expected to take pictures. The kick off will be 11am. I have also found out that I do not need my partner to count they have staff that can do that. In the afternoon the firsts are playing at home the following morning the 16s have a home game.

My swimming this week hasn't gone that well because I am beginning to talk to people and waste time that way. So I probably only did 30 lenths on Tuesday and swam for 40 minutes today. I think the swimming is doing me good apart from being hungry all of the time I seem to be firmer. I have been told the best time to go swimming is 8am Tuesday and Thursday.

This weekend I am not doing any rugby because I am going to barcamp north east in Newcastle. Should at least be a break from the politics of the u13s team. Even if I chose not to be involved one can't help but experience the tensions that others are experiencing. Apart from creating my own, I am very good at that.

So am hoping that this weekend will give me a break. Trouble is I need to find something to talk about soap making maybe or knitting socks anyway that is for tomorrow.
Posted by Sallyje at 6:56 AM No comments:

There are 11 swims left before the big one. This week I have swam 30 and 40 minutes. I reckon I am doing 4 lengths in 3 minutes. So today based on that I did about 50 lenths. So as a rough estimate I would be doing the swim in 75 to 90 minutes.

The under 9s team at bishop are organising a mile run for sport relife the adults can pay £1 and walk round if they wish especially if they are bald and over 40. My cop out is I am needed to take the pictures so therefore I cannot do the run. So I paid my pound and am going to swim it 64 lengths is on the way to 100. People can not come and watch me do the swim as I am doing it on a Friday morning. hopefully Stuart is taking the day off to count my lengths. Anyway there is time for things to change.

My youngest(13) has beed excluded from school for setting up a facebook group against a teacher he doesn't like. To his credit it did get 97 memebers. He is being very mature about it accepting his punishment. He knows that it was wrong and he will not do it again. however, I think we both see the other side of this.

As for next week 30 minutes and 45 minutes 40 + 60 getting there although it doesn't fell like it at the moment and in the meantime knitting socks and doing websites,
Posted by Sallyje at 2:56 AM No comments:

This is the first week I have swam 2 1/2 hour sessions. And today I had to make my own way to the swimming pool as Stuart has to go to Rotherham for a meeting. It was a beautifill morning, cold and clear. I was lazy and got the bus back, but I could still end up walking 4.7 miles today.

As for the swimming I think my stammina is increasing I am now swimming 2 backstoke 1 breaststoke and 1 back paddle I say paddle I rarely use my hands. The trouble with swimming on your back is that you can't see where you are going and it annoys people. Ladies who manage not to get there hair wet untill they get in the shower. I think I am fitter in myself as well although I think I need a bit more stamina for the big day.

So Other than the rugby club by that I mean Bishop Auckland not Aycliffe. I have been commisioned to knit for my grandchild. They asked for a blanket and a toucan. The blanket will consist of 100 10cm square so far I have knitted 4 along with 1 pair of baby socks and mits and a hat. I suppose this is one of the qualifications for being a granny.

I am really proud that the County website (www.durhamrugby.com) have put a link to the county pictures I took last Sunday at Bishop Auckland. The wheather was terrible dark and rainy.

Now I am thinking will I continue after the big day, I really don't know, but if I didn't it would be as stupid as a rugby club running out of beer
Posted by Sallyje at 2:09 AM No comments:

I am dyslexic which explains why I haven't seen any weighing matching or been given any dietry advice. So I have no idea whether I am loosing wieght or not I am certainly eating more, I suspect that I am fitter. Last Thursday I walked to the sports club a two mile walk and did it in half an hour. I may walk there today after walking home and walking the dog today a distance of 4.7 miles in total.

As of next week I will be going slimming twice a week maybe 2 1/2 hours we shall see. This week I have had a bad cold probably doing to much trying to beat Stuart last week. When I have a cold everybody suffers

I don't know how many length I swam this week more than 20 and possibly more than 40 spending 40/45 minutes in the pool. Walking home my legs hurt we shall see what I am like tomorrow.

As for rugby who know the weather is a still a bit changable at the moment it is amazing how obsessed you can become with the weather when if affects what you do. Most people talk about the weather for something to talk about the same way most men talk about football even if they are not that interested.

So next week 2 half hour sessions
Posted by Sallyje at 5:11 AM No comments: